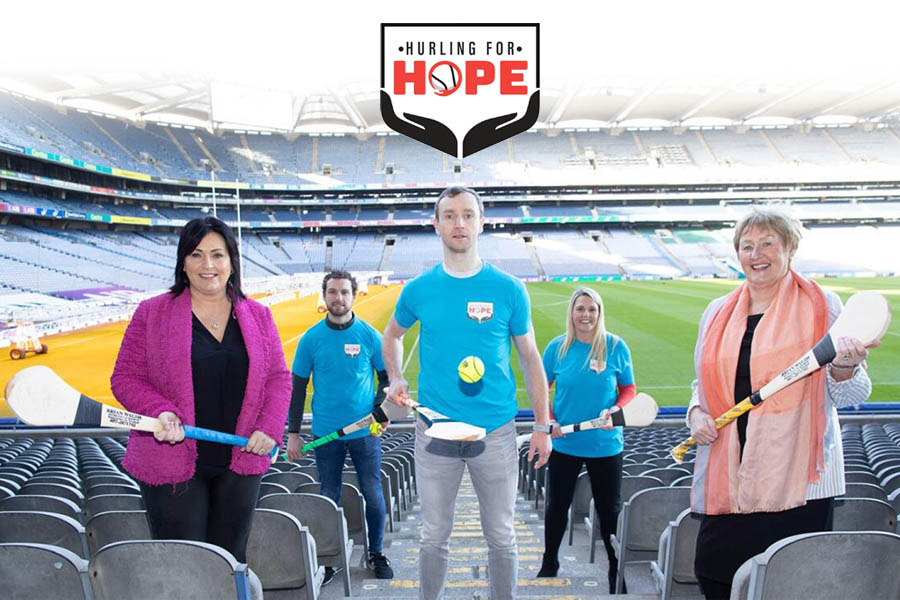 A group of friends, players, mentors and teammates from Ballyhaunis GAA Club in Mayo, have come together and organised a unique fundraising event to support two charities, the Mayo Roscommon Hospice Foundation and the Irish Motor Neurone Disease Association.

Launched at Croke Park, by RTE’s Jacqui Hurley, CEO of the Gaelic Players Association, Tom Parsons and former Mayo footballer Keith Higgins, the Hurling for Hope fundraiser will see Keith along with his clubmates “solo” a hurling ball from Castlebar to Roscommon. The challenge will begin at Mayo Hospice in Castlebar and will go via Claremorris, Ballyhaunis and Castlerea before finishing at the Roscommon Hospice in Roscommon, covering a total distance of 100kms. The players will be joined by a myriad of current and past GAA players along the route. The event will take place over four days commencing on Wednesday 23rd March and finishing on Saturday 26th March.

“We are so delighted that Frank Browne and the huge team involved have chosen us as one of the benefitting charities, for this unique and challenging fundraiser. 2021 saw the Foundation launch our specialist palliative care unit in Roscommon, the second unit to be launched in 3 years and this was made possible from incredible fundraisers just like Hurling For Hope. As we continue to fund palliative care services in our community and hospices we encourage everyone to get out and support this fantastic group along their journey and we are so grateful to all the organisers.”

“Irish Motor Neurone Disease Association is delighted to be one of the chosen charities by the Hurling for Hope campaign. This imaginative event is going to create great awareness of Motor Neurone Disease in the major towns throughout Mayo and Roscommon. The services provided by the IMNDA will benefit greatly from this fundraiser and will allow us to deliver the vital services to families that have been affected by MND. We are a small organisation and we rely heavily on fundraising & donations from events like these. We would like to take this opportunity to thank everyone involved in Hurling for Hope and wish them all the success with their fundraising endeavours.”

“Players are leaders and role models within their communities so it’s no surprise to see so many of them backing the Hurling for Hope campaign. I would like to wish all involved the very best of luck as they raise funds for two such worthy causes.”

“I’m delighted to be involved in this amazing fundraising initiative, supporting two great charities. I think the last two years have shown us just how much events like this can lift community spirit. I’m sure the lads will knock a bit of craic out of the journey along the way too and I’m looking forward to following their progress.”

“On behalf of the Hurling For Hope group, we are delighted to be undertaking this challenge on behalf of both the Irish Motor Neurone disease Association and the Mayo Roscommon Hospice Foundation. Our aim is to raise awareness and some much needed funds for these two fantastic charities, which are close to all our hearts.

We hope that as many people as possible can come out and support us along the journey and even solo a few miles.”

Manage Cookie Consent
We use cookies to improve your experience on our site. Cookies help us understand how our site is being used. You can amend your cookies preferences using the cookie settings button or the link in the footer at any time. By continuing to use our site you consent to use our cookies.
Manage options Manage services Manage vendors Read more about these purposes
View preferences
{title} {title} {title}